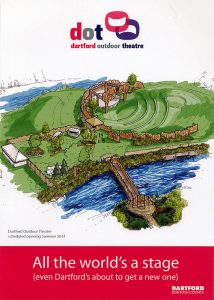 As announced in February this year, plans are in place for a brand new, open air theatre, in dARTford’s Central Park.

After this years performance of Shakespeare’s Richard III by the Changeling Theatre in Central Park, flyers were available giving a brief outline of the plans for a permanent home for future performances.