Dartford Toy Appeal 3 has been a wonderful success

Launched in 2013, Dartford Toy Appeal was an idea from Kelly Grehan, a Dartford resident, to collect Christmas presents for local, disadvantaged children.  At that time her hopes were to have around forty toys donated for the one charity, Choices.  Through her tireless enthusiasm and dedication the project has grown from four drop off locations in Dartford to at least six throughout the borough. 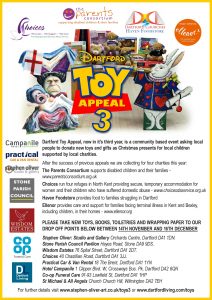 This year the appeal ran from 14th November to 16th December.  As soon as the appeal was publicised people began making donations.  Clubs, businesses and groups began getting in touch asking if they could join in; churches, play schools, shops, members clubs, families, adults and children across our community contributed.

Founder and Coordinator Kelly Grehan said “I just cannot believe what it has grown into.  I was worried whether we would get enough toys for four charities, to see this response was amazing. What is also wonderful, is getting messages from businesses, shops, clubs and individuals asking if they can get involved.”

After all the toys and gifts had been distributed to the four charities (Choices, The Parents Consortium, ellenor, and Haven Foodstore) there was a little time left for a photo shoot at the Gallery.